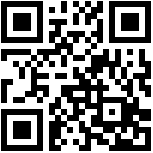 Have you ever wondered what those strange new bar codes are that are popping up in newspapers, on posters, on the web?

They are QR codes (2 dimensional bar codes) and they offer one of the easiest methods by far  of loading web content on a Smart phone. To give it a try, using the scan option on your phone. What page does this code link to?

If you are interested in using QR codes in your daily work, post them on a website, a blog, a social network, sign up at bit.ly, shorten a link and generate one of your very own.

Just consider the implications this may have for the role of mobile devices in education!

Posted by mrsjgarcia at 08:25 No comments:

Phones in My Classroom By Choice!

Telephones don't have to be a curse. No, I don't like answering them or yacking away for hours on them, never did, even as a child. There is a difference however, today's telephones are so much more intriguing than those that existed when I was a child. For the longest time, I have been reading and chatting to others about the phones our students carry around, telling myself that I can make good use of these devices in my classes, but that's all it was...talk.

Today's mobile phones are not only phones, but so much more. They are Smart Phones! A good majority of our students own BlackBerries or other phones that hook up to a 3G network or our school wifi. Some of these devices may not even be phones at all, some of them are iPods!

I created an account at PollEverywhere which is a great site that enables users to create polls, share them online with links or as embedded features on blogs and wikis, and provides a variety of ways for those being polled to respond. I didn't want this to cost my kids any money so I decided against text and opted for Tweet and  Web voting.

During the lesson we were working on micro-blogging research with Twitter (plan A)and/or Today's Meet (Plan B). (We had trouble creating Twitter accounts from school.) At the end of the lesson I asked the kids to go get their phones and other devices capable of connecting to the school wifi or a 3G network. Other teachers in the building gave me a few strange looks (Generally speaking, cell phones are to be turned off and packed away during the school day.)

I emailed the link to the kids and they got on task and answered the poll, while we watched with excitement as their responses appeared on the screen. I have asked them to bring their devices in again next week and thanked them for being a part of my little experiment. I am pretty sure that this is going to become a part of my weekly starters and/or plenaries all because my kids already own Smart Phones or other Smart devices. 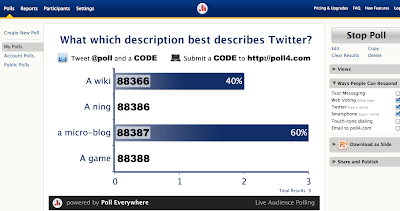 Posted by mrsjgarcia at 08:44 No comments:

When a Lesson Explodes in New Directions

One of my 7th grade classes was settling down to work on their collaborative presentations, which they share with a school in Colorado, when all of a sudden there was great excitement! Okay there was an explosion of excitement.  The other class was also online and working on the presentations. To say that my kids were thrilled is an understatement. Immediately Google Apps group chat windows began popping up and student exclamations could be heard all around the LRC. These students were no longer separated by thousands of miles.

We very quickly shifted the entire class into a seminar room, got Skype up and running at both ends and within minutes were video conferencing with our partner school, as the excitement began to crescendo. We had not prepared in advance for this. It was a bit of a surprise, so there was no script, just kids engaging in discussions about each other, face to face with their partners in another country. Hobbies, favourite books, musicians and the weather were the main topics of discussion.

It's interesting how many of us find it easier to engage in text chats, where ideas flow easier than in video chats, where all of a sudden the most outgoing child might find themselves at a loss for words.

Anyway we just managed to get through all the groups, and with five minutes remaining in the lesson, the kids returned to their computers to finish up working on their presentations and texting with their partners. The kids at our end were very reluctant to log off of their chat sessions to pack up to go home. That's powerful!

You know when a lesson has surpassed your expectations,  and become something even greater.This was one of those moments.
Posted by mrsjgarcia at 15:17 No comments: