On Saturday March 17th The LRC and ICT Committee held the annual T4L or technology for learning morning.
After a lovely breakfast, courtesy of the school, staff were treated to a special keynote session live from London, on  3 trends in education.
Next, everyone engaged in a speed geeking session. Teachers spent 4 minutes at a station in a circuit of 13 stations and moved on to the next station each time the whistle was blown. During each stop they learned about a different T4L tool. Some of the themes included  less traditional teaching and learning tools such as World of Warcraft, Minecraft, Lego and incredibots, as well as newer tools including iPads and digital flip books. There were plenty more amazing ideas shared at this time. They are outlined in the copy of our program below.
Next, staff members participated in 2 digital playground sessions in which they were able further explore the tools  they were most interested in.We chose two sessions as we had more topics than presenters and this allowed us to swap over between the two.
These were all dynamic learning experience, but what made these sessions even more exciting is that many of them were lead by our ABC students.We had a total of 17 students volunteer to run sessions, both speed geeking and in the digital playground. We gave them some guidelines, talked to them about what they could do and they took it from there. They were fantastic! Many members of staff came up to me after the fact to mention how impressed they were by what the students were doing.
PLANNING
A Google Site was created to house content for the session in the form of web pages, one per idea. The initail Google Docs planning was  also transferred over to the site. This included lists of students, activity rotations  and presenters, circulation maps and links to the program. Google Forms were used to collect attendee lists as well as after session feedback from teachers. This particular site is restricted to staff members only, but you can get a taste of some of the sessions by looking at a few of the pages which I cloned for my Inset Wiki.
Please check out our Flickr Set and Facebook Album for more on this great event! 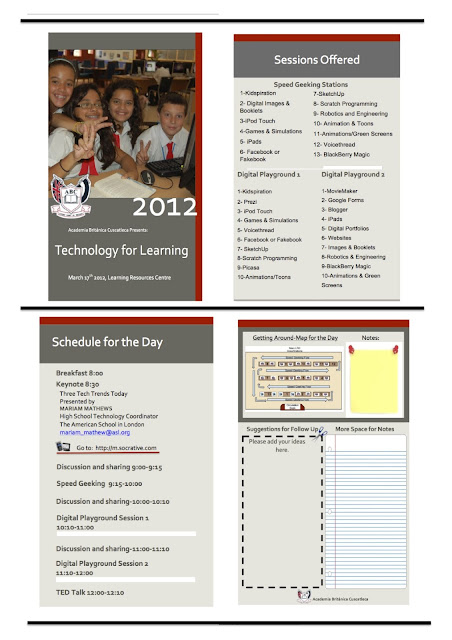 Posted by mrsjgarcia at 13:01 No comments:

The Brain on Vidoe Games

I am a proponent of using video games in teaching and learning. I use them with my students and my own children are avid gamers. That said I recognise that I there are various effects, both positive and negative that these types of games can have on the human brain. It is important for everyone, parent, teacher and child, to be aware of these effects. Below you will find an  infographic from Educational Technology and Mobile Learning blog which outlines some of the effects of video games on the human brain.

Posted by mrsjgarcia at 08:48 No comments: