ur Anual STEAM Fest was a huge success!

This STEAM Fest, our school maker faire, was different in some ways than STEAM Fest 2016, in that the students defined the projects from day one. Last year, was our first attempt and we found that we ended up supplying a list of potential projects for students to sign up for. This year that wasn't necessary as staff and students had been through the process once before and had a good idea of what it is they would be taking on.

This year we tried something new. We live streamed our event to our School's Facebook pages. Several members of staff wandered the various venues with roaming cell phones and filmed, interviewed and talk with participants throughout the day, following a published schedule.

We found this really useful as we were able to open up the event to parents and families who were unable to attend. They were able to tune in o the event at given times to view the action.

Here is a short video from the auditorium, we took using Facebook Live Stream.


They say a picture speaks a thousand words.
Here is a link to our Flickr Gallery from the event. It speaks for itself. 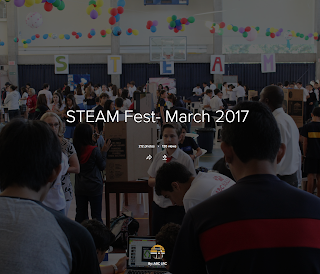 Posted by mrsjgarcia at 09:55 No comments: