This week we have continued our study of Input Devices in 11th ITGS. The students randomly selected one input method to focus on and then scripted a short In Plain English Style video.

Some opted for paper cutouts, other whiteboards, and pens. The resulting videos were varied not only in content but in method. The students not only consolidated their understanding of these input methods but also found creative ways to teach others about them.

Here is a short mash-up of those that were turned in today.

rame>
Posted by mrsjgarcia at 17:04 No comments:

AR and VR in the LRC

With the arrival of our new Leap Motion devices, and our existing Google Cardboard we have had the opportunities to really explore with our students. These coupled with our existing iPads and QR code Apps, have lead to a series of exciting activities so far, this school year.

We have been  looking at input devices in 11th grade ITGS. This was a prime opportunity to test out with the leaps and have the kids prepare their own activities. During the session, we worked with both the Leap Motions and MakeyMakey input devices, both of which are powerful learning tools, however, this post is about AR and VR, so we will leave the MakeyMakey discussion for another time.

In order to prepare for the lesson, I provided students with a link to the Leap Motion Gallery and asked them to choose and download a couple of modules they were interested in trying out. It is important to note that there are a great variety of activities to choose from, unfortunately, some are not available for Mac users. It was easy to share the information with students, as we are using Google Classroom to run our lessons and communicate with each other. The kids had a wonderful time exploring different modules. You can view some of the work they did in this mashup video from the input lesson.

*We did find,  that we had to really work initially to get used to the range that the Leap Motion would detect. Students persisted and did get the hang of it rather quickly in the end.

In 12th grade, we have been looking at wearable technology, what better time to bring out the Cell phones and Google Cardboard.

The kids downloaded the appropriate app to their cell phones for homework and after a brief introduction they partnered up and we took the tech outside. It is important to have kids working in pairs with VR as it is easy for them to trip and bump into things. Our students spotted each other in partners and took turns with the viewers.

The excitement quickly crescendoed,  as students explored using these simple cardboard devices. They were immersed in what they were doing,  actively exploring, evaluating the technology and having a great deal of fun doing so. All we needed to accomplish this was the cheapest of cardboard viewers,  their own cell phones, and the free apps. You can even download templates to help you build your own cardboard viewers.

Please see the previous post for a short video and further details on this activity. 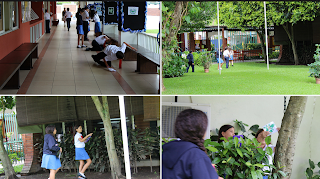 Each year we host an orientation session in the Learning Resources Centre for the 6th grade students moving up to Secondary.

This year we decided to take advantage of the popularity that has grown around Pokemon Go and use it as our hook. We used our Pokemon theme, along with our existing iPads, a QR Code reader (We prefer i-nigma),  paired with physical QR Codes to build a massive (I kid you not-over 100 students strong!) scavenger hunt.

The  QR codes were used to place scannable text clues within Pokeballs which were distributed around the school, along with Pokemon characters. We used Google Maps to create a perimeter map for the work and determined different routes for each team.

Teams started off with a small Ziploc bag containing their first QR Pokeball clue and a copy of the map. Each team was given an iPad.  It was delightful to watch the students tearing across the field, verifying their positions on the map, discovering their clues and rushing to see which would be the first group to finish. Some of them even ended up in the shrubs outside the headmaster's office. Upon arrival at the LRC(They all ended up here), they had a book related clue to resolve and activity to complete upon finding the right location and identifying the book. They were then given some time to browse the resources on offer.

Here are is a link to the photo gallery for the event.

We have plenty of other activities planned for the school year involving our modest collection of AR and VR devices and applications and are looking forward to discovering, even more applications to use in our regular lessons and special events. The next step is to have t-shirts made for our annual book week, covered in interesting codes and having students scan us as we move about the school.

*One last note, we used to create VR pop-up books using Zooburst, which was a great application, however, the site has since closed.  They do offer an App however that seems to still be available. It is an app worth investigating.
Posted by mrsjgarcia at 11:08 No comments:


Last week we spent half an hour testing out and evaluating Google Cardboard in our HL ITGS class. This was  part of our preliminary work on wearable tech. The students viewed a video overview, learned how to use the headsets and the Cardboard App (which runs 360 degree videos), then assembled the devices. Next, we headed outdoors to the grassy area in front of the LRC. Luckily, there was a respite in the rainy weather and the grass was also dry, enabling us to purposefully wander around the grounds, whilst immersed in different VR environments.


It was fascinating to observe the kids as they took tours, spotted their partners and shared their locations and findings, all without leaving the lawn in front of the LRC. This work was punctuate by excited exclamations, location call outs and the regular directions of the spotters.


The next step is to continue the debrief, and record their findings on their response sheets. Interestingly enough, the students were very impressed by these cheap cardboard constructions built for cell phones, despite their awareness of the range of alternative high tech VR devices currently available. It will certainly be interesting to read their written responses to the this experience.
Posted by mrsjgarcia at 09:11 No comments: