A few months ago the Spanish teachers approached me about helping them set up a trilingual radio show, that would have students reporting on different aspects of school and community life several times a month. The students and teachers worked very hard to prepare the first episode, while I set up our Podbean account and our iTunes channel. This was all much easier than I expected, painless really and very fulfilling. We now have our introductory podcast as well as the first student episode in Spanish and French available on our channel for download and subscription! Do have a listen in, if you get a chance.
Posted by mrsjgarcia at 16:35 No comments:

Flipping the Learning-Creating Videos in WoW 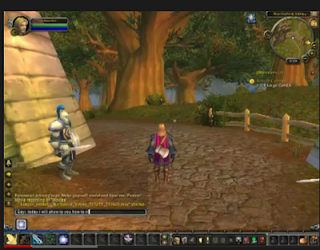 Our club met up again yesterday, but a lot has happened in the course of this last week. The students have been working at their quests every chance they get and some are now at level 20! I won't mention what level I am at.  They have learned how to get around, fly on griffins, take trains and boats, and use tunnels. They are way ahead of me now. Does that worry me? Not a bit, it is exactly what I hoped would happen. My students are furious and relentless about their WoW work.

So far we have only begun to use the blog. The skill is new to most of them and I want to make sure they are comfortable with it before introducing the readings and reflections. Soon after our first lesson, I realised that my carefully planned unit would need a major revamp. They were way past much of what I had planned for them. If only they were that way about all their school work....I am pleased to mention that the directed teaching has been minimal and I haven't spent hours putting online tutorials together either. They have been directing their own learning with very little support and sharing new skills with the group.

It is for this reason I thought it only fit to have them share some of their discoveries with us by recording using the WoW Mac Options. We could have gone further, narrated the vids, rendered them after careful editing in iMovie, or done screencasts with Quicktime or Screencast-o-matic, but all except one (which was done as 4 separate vids) are unedited footage. The learning has flipped with no upset to those involved. My students are now my WoW teachers and I retain my position as facilitator, the setter of assignments, readings etc...How I envy the speed with which they learn....again if only they could do that, or feel motivated to do so in all their regular lessons.

Did I mention a 12th grader asked to come on board (a level 84 12th grader!!!)? We now have an expert in the midst, which brings me back to my earlier statement, something about students as teachers. The roles have certainly flipped, leaving me free to learn alongside them, to learn from them and facilitate the journey ahead.

Posted by mrsjgarcia at 16:26 No comments:

We had our first World of Warcraft Meetup today! This was a very exciting first step for us. The kids couldn't be more excited and to be quite honest nor could the teachers. Please read more about it on our WoW Blog.
Posted by mrsjgarcia at 19:59 No comments: