This year we shook up our 6th grade programming unit by working with Sphero Mini Robots.

The Students did a series of basic online lessons through SpheroEdu and then went on to the final challenge. The challenge was for them to program their Sphero Mini Robots to remain in a circle (roughly 1 Metre in diameter) and try to push the opponent out of the ring.
The first step however was to research Sumo Wrestling and make sure they understood the rules of the match.

Next, they applied what they had learned in ICT lessons to build a sequence of movements with loops to ensure the robot remained within the specified area for a certain amount of time.  They used variables to count log collisions and used what they know about angles, time and speed to write their code. They had to tweak the initial codes quite a bit as often they had set the speed too high. Most students either chose to use star like formations based on angles while others used geometric shape tracing.  The resulting competition when paired with some motivational music was very engaging battle of the bots. What a great way to end the school year!

I have included the video below. Just click to view it. 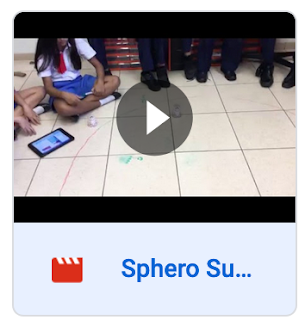 Posted by mrsjgarcia at 13:58 No comments:

Cooking Classes at the LRC-Supporting our Life Skills lessons


Written and posted by the LRC Team

We work with other departments in the school, frequently in the LRC and this includes our Heads of Year in support of the Life Skills Program. The sixth grade coordinator recently expressed an interest in the work we were doning with the cooking club this year. The conversation ensued and we decided to put together a whole grade, cooking class. As you can imagine, this is not an easy task to pull off. We don't have a enough equipment for the entire 6th grade to use at the same time, so In the end we decided on a cooking class in which the students needed to follow a recipe to assemble a snack for themselves.

The students had a great time making spider cookies for the class and the teachers had a great time observing them and helping out when needed. The students worked in groups of six at stations, which were placed under cover (since the rainy season is now upon us). They worked as teams as well as independently, learned important lessons in perseverance and resilience when things didn't always go quite the way as they expected (usually this had to do with pretzel spider leg problems),  and learned a very important lesson about sharing spaces with others. In addition to this they worked through a recipe, used a diagram to guide their work and learned some of the basic expectations for working with food.

The cookies were assembled from crackers, cream cheese, pretzels and raisins were used for eyes.

It was the first time we introduced food preparation in a Life Skills class. We are planning to do a lot more cooking classes with year groups, probably on a rotational basis and also include some basic sewing activities for Life Skill periods next school year.

Please have a look at the media below to immerse yourself in this exciting activity and do also check out our photo gallery at Flickr.

Posted by mrsjgarcia at 13:14 No comments: