This is our 4th year running the A Better World Project, and it is ageing very well. We have come a long way from that first year. When we first started out we were using Blabberize to produce rapping images, then we introduced student performances. Eventually with the arrival of our first set of iPads, we began creating characters with even more movement using Morfo.

This year the project has taken yet another turn. We have pretty much removed student performances. We thought in retrospect,  that while some were very good, others really took away from the focus of the rap video. We also worried that some may have been misconstrued as being insensitive to the topic.We have left performance work as an extension option this year, meaning that only the high fliers will be doing this.

We had intended to run the project exclusively on iPads this year, working with Google Drive for collaborative lyric writing, Garageband for music production, Morfo for digital rappers and iMovie for the final video production, however that too has changed.

We purchased Crazy Talk this school year for 13 of our computers and it has really revolutionised the project. Using Crazy Talk our kids are able to creating digitalised rappers from almost any digital image. These rappers are capable of a great deal and really come alive for the students.

So we are back on the Macs, using Google Drive, Garageband, iMovie, Crazy Talk and Wikispaces.  The kids are loving it and so are we.

I have included a video example from one of our recent projects below. You can access all the projects from this year as they are posted and from prior years on the project wiki.

Posted by mrsjgarcia at 09:17 No comments:

The Art of Storytelling and Illustration

We were fortunate to be visited by award winning author Janine Kimmel last week. During the 6 sessions she held, she spoke to our students about the writing process she goes through when authoring her books.

Do check out our complete post on the LRC Blog. 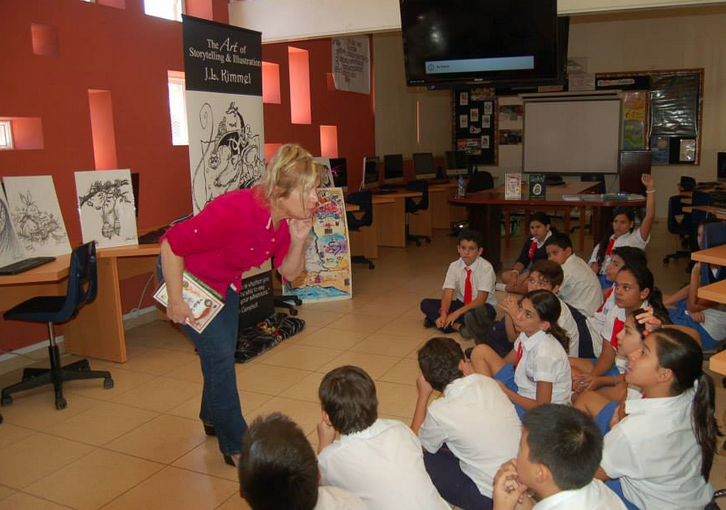 Posted by mrsjgarcia at 09:46 No comments:

Every year we weed old, out of date, musty, dusty books out of the collections. Let's face it they are not being read for a reason. Depleting the shelves in this way sounds harsh but removing books that are no longer relevant or in conditions to be read without rubber gloves, is good practice for a school library. It makes room for new, interesting titles but also makes it easier for students to identify the hidden gems, as they are no longer buried away on the shelves. It gives the library staff a chance to refocus book purchases and build important, relevant collections for the community, some of which will be in print, others digital.

This week we have been on a mega weeding rampage and spending a great many hours amidst the dusty yellowed pages. We have now completed our mission and successfully removed many hundreds of out of date, non fiction books from the shelves.

Yes our shelves are a lot emptier, but they now contain relevant, up to date dust free non fiction editions. We can now begin the job of restocking with relevant titles, that meet the needs of our students and teachers.

Not everything is going out the door. While weeding the shelves we discovered a few very interesting titles that will remain in the library as examples of very old literature. These titles date back to the late 1800s and early 1900s.  They will go on display. We have also pulled a great many "cool" non fiction books that have been ordered in over the last few years, these are the gems that were hidden away and are now out in the open. They are going into a special "Cool Non Fiction" Display for students, which we hope will promote them and get them into the students' hands.

Here are some pictures of our piles of discards.

Posted by mrsjgarcia at 16:15 No comments: