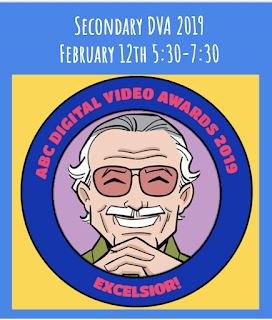 This year's we are celebrating the ABC DVA's 10th anniversary!

How time has flown since our first practice run in September of 2009!

The DVA is and has always been about celebrating and sharing outstanding audio video work by the students for the students, as well as the entire ABC community (campus and extended). That said, over the past three years DVA has opened the doors to other schools in the local community. This year's DVA includes submissions from Acton Academy in both Primary and Secondary categories.

DVA has grown incrementally in both scope and length over the years to the point where the decision was made to run it as two events.
As a result, this year's DVA will run over 2 nights instead of the traditional one night event, with Secondary launching the events on February 12th and Primary closing DVA on February 13th.

Over the years, the ABC DVA has gained recognition internationally, as well as nationally through the regular sharing of this important work through community outreach and conferences such as Library and Classroom 2.0, Winter STEAM Conference, the ISTE Conference and local events.

One of the greatest impacts DVA has had over these past 10 years however is the growth of a culture of  creation through which all  students have opportunities to learn new skills, apply them across situations and subjects and share their work with audiences in the community.

Please go to our official DVA Website and our various DVA Flickr Galleries to learn more.
Posted by mrsjgarcia at 10:17 No comments: