It is Theatre Week at the LRC 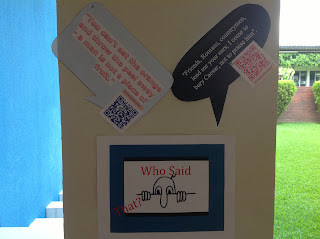 Students are invited to come along to the mask making workshops after school in the LRC each day to make cool masks and even help prepare a short performance!

They are also encouraged look at the Who Said That? posters outside of the LRC.

A few of them are included below. Can you figure out which theatrical character spoke those words?

Students can record their answers on the papers provided and add their own favourite theatrical quotes to the empty speech bubble posters. 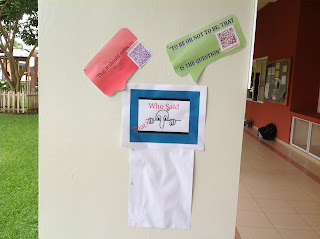 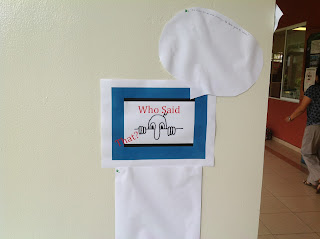 Happy Theatre Week!
Posted by mrsjgarcia at 14:55 No comments:

It is Banned Books Week this Week?

It is Banned Books Week this Week! Many books are banned each year and it has been this way throughout history. What is censorship? Why do people and organisations ban books?

Do you agree or disagree with this practice? Does the LRC ban books?

Follow this link if you would like to know more and check out the banned books display in the LRC.
Posted by mrsjgarcia at 14:52 No comments:

Starting a New SY With iPads

The new school year has begun and brought with it our New iPads. We have also received the sync station and the Griffin covers. We did not purchase a sync cart even though we  needed storage, as most of what we found was very expensive, even before the cost of shipping them to El Salvador. We decided to refit an old laptop trolley for them  instead, by a sync/charge tray from Parasync and see how it went.  I have included a picture of our set up so far. 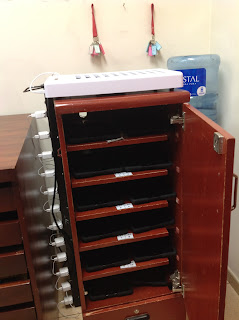 We have since spent many hours syncing them to iTunes accounts, identifying and adding new apps, trying to create new iTunes accounts for each one, and failing miserably.  We have also spent a lot of time basically setting them up with email accounts, itunes accounts, restrictions and folders.

Syncing: This took a while the first time as we were doing 10 at a time, using the sync tray and adding over 200 apps to the iPads. I was so grateful for the tray, which cut my work 10 times over, even if it was a long haul.

Organising: We then invited our students in whenever they had free time to help us organise the apps properly for us. We still haven't finished and the reason for that lies with iTunes accounts.

Unfortunately, at a point during the process,  iTunes blocked us from creating more than 4 accounts for our iPads. Now we really want everything to be on the up and up with this, really there is no other option, yet we still can't create the accounts through which to purchase apps. This means that we have had to delay and modify some of the plans we had for the devices, for the time being. We contacted Apple, and they said they would help us find a solution. They suggested we gift them to our other devices, which is something we too had considered. Unfortunately after doing so, we have yet to receive the confirmation emails for this. All is not lost, I have a screenshot of the purchases we made.

Since we were moving to gifting the Apps I decided to create an account in iTunes for each remaining iPad that didn't link to a credit card, since that route was now blocked. Lo and behold, the None option is now missing, forcing anyone who wants to create an account to link it to a credit card. Again I am not the only one experiencing this issue.

Let me just say at this point how much I love my iPad and how excited I am to have a set (albeit a small set) to use with our students. Despite all the obstacles so far, I am still convinced we can make this fly, and fly high! We knew there would be growing pains when we did this.  I just wish Apple would make it a lot easier for Educators in countries outside of the US to purchase apps. At present we don't qualify for their volume purchase plan.

We are just beginning our pilot and so far it has been very successful. We are using the iPads for animation work, QR Code scavenger hunts, and will be using them for research and note taking as well as class starters and brainstorming, very shortly. We have plenty of other ideas for using this versatile tool and are busily adding them to our schemes of work. I am hoping to be able to report back on the process again very soon.

Posted by mrsjgarcia at 11:53 No comments: