This year, as is the case each year, the Spanish Department and  the LRC organised the school Poetry Week. This year's theme was the Galactic Poets. The Spanish department and students prepared for many weeks through their daily lessons, planning, writing and reciting poems in anticipation of the final event.

A special Lunch on the Lawn was held on Friday May 15th, in which students recited their own poems in Spanish for staff and students. During this event the three first place winners were recognised with an award and certificate of participation.

The quality of the winning poems was outstanding.

The LRC prepared a display of tongue twisters, riddles, poems to run alongside the event, which were available inside the Learning Resources Centre.

Congratulations  to I.Vega for writing and submitting the winning poem, My Star. 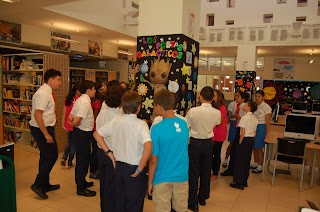 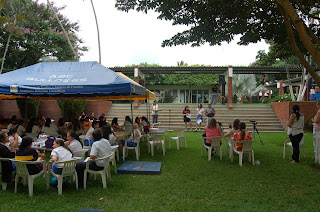 Posted by mrsjgarcia at 11:14 No comments:

Each year in May, the excitement in and around the school begins to build as students and staff prepare to spotlight and reward creative video work done throughout the school year. This is done at a gala event, called the DVA (Digital Video Awards) which is now in its 5th year.

During the year,  students plan and produce videos in lessons and independently, some of which are then submitted as nominees for the Annual DVA. The ABC community of staff and students are then given the opportunity  to vote for their favourite videos  in each category.  The LRC uses YouTube Playlists, and Google Forms for the voting process, both of which work quite nicely. This year however we were asked to maintain certain collections as visible only for the school community. We found that Google Drive folders worked very well for this particular purpose. In fact the system worked seamlessly, even though both YouTube and Google Folders were both in use.


Our school director, Mr. Keslake, did a great job of opening DVA and awarding movie of the year, while the head of Secondary, Mr. Spicer did a wonderful job as MC.  The staff and students involved in the preparations and the actual event did a fantastic job. The Performing Arts Centre looked spectacular. Students were directly involved in running the interviews, the photo booth, filming drone videos, working with light and recordings and giving out trophies on stage. As each of the various categories were called, the nominees took the stage to the epic sounds of Metal Gear Duel and were awarded small participatory trophies, followed by the awarding of trophies for each winning video.

This year we had a great turnout of students and staff. In fact there were 89 students, from Primary to Secondary nominated for their video work.

The best movie of the year award  was for the video "Shift" which also won best IB Film award.

Congratulations to all the winners and all the participants. 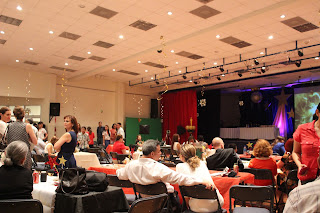 Do have a look at our DVA Flickr album for more pictures from the event.

Posted by mrsjgarcia at 11:01 No comments: