The January Newsletter is Out!

Here is our January Newsletter. Do have a read when you get a moment and feel free to comment back to us on this blog.

This is a snapshot. Please click here to read it online. 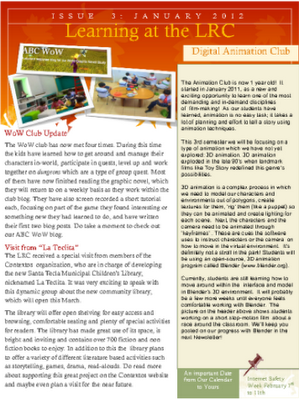 Posted by mrsjgarcia at 14:40 No comments:

When Glitches Lead to Gain 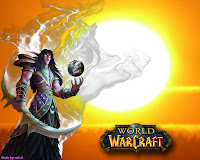 
Each Monday our World of Warcraft group meets to discuss our readings, blog posts and work together in-world. Unfortunately yesterday afternoon, WoW was experiencing difficulties with user log-ins and after a few tries we gave up. The kids then resorted to their next favourite game, Minecraft and a discussion soon began. Some of the students had found out on Twitter that on the 18th (tomorrow) Minecraft might be allow online users to play the complete game for free. They were very excited about this, and since I don't play Minecraft and couldn't access my WoW account,   I decided to delve into it further.

It turns out that many online services have planned activities, amongst these "blackouts" to protest SOPA. We weren't terribly familiar with what that was, so we dug further and found out that it is a piece of US legislation that is meant to protect against online piracy- called the Stop Online Piracy Act. There is a great deal of public opposition to SOPA and as a result many online services have planned a blackout. 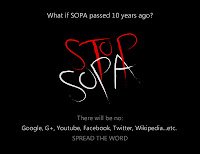 What is your Opinion on SOPA?

The kids, our learners of the remix generation, were genuinely interested in what SOPA was and why Wikipedia, Minecraft and many others were so unhappy with it that they would go to these measures. I don't think I have ever had 6th graders ask me to send them news reports before. Yesterday after a brief discussion, many of them requested that I forward on the information to them.

Posted by mrsjgarcia at 08:48 No comments:

It is always very exciting to receive feedback on published work. It generates a feeling of pride, boosts confidence and helps you to realise that you can make a contribution regardless of your age.

Today I received a notification that one of the student videos received a comment.
Our novice WoWers were able to help someone with the game in their very first video tutorial.
"gaqol29 has made a comment on Darnassus- transportation for Night Elves.mov: thanks alot this really helped me to get out of the elf world"

Please do take a moment to comment on our WoW blog when you get a chance. The students are submitting their first homework assignments based on the readings and the game this week.
Posted by mrsjgarcia at 14:32 No comments: