Over the last few months we have been working with our 7s on a rather large, but very exciting sustainable farming unit.

The unit came to an end last week with what we have named Salad Day. It isn't actually a day, but about two hours of harvesting, washing and sharing the produce that grew. 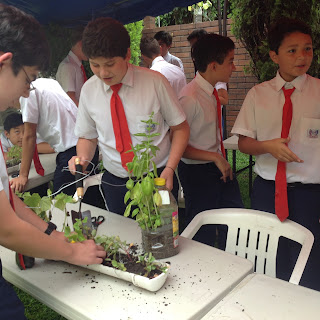 Our cucumbers were still flowering as were the tomatoes, but the basil, radishes, cilantro lettuce and even some of the carrots were ready for eating.

The kids had a lovely time as did the teachers and everyone really enjoyed the fruits of their labour.

Click here to view more images from this event.
Posted by mrsjgarcia at 08:38 No comments:

We have deliberated for more than a year, about the purchase of a 3D printer for the Learning Resources Centre and ICT Department. During this time, we looked at many models under $1000, had people in, gone on courses, and viewed even more at ISTE 2015. Finally, last week,  we made a decision. We really liked the Polar, and may buy one yet,  however it was too late for us to spend that kind of money. We decided to go with the XYZ Davinci instead.

It took a week for the printer to get  to El Salvador, which was a feat in itself and about 2 days, made up of a few minutes here and there, in between lessons and end of year activities,  to get things going.

Our first calibration attempt failed and the first printout was messy, probably due to the quality selected and the calibration having failed! Perhaps the most challenging aspect of setting it up was getting the filament to catch. After reading numerous forums and trying things out based on advice, I decided to give it an gentle nudge while the extruder was trying to engage it. Finally, it worked!

I am presently trying a slightly different model at a higher quality to see what it can do. The XYZ is a wonderful not so little machine and XYZ website is very useful. I would strongly recommend the beginner tutorials. They are quick, to the point and very helpful for noobs like us.

I can't keep my eyes off of it. I find myself entranced, watching it create its little model. It is like watching XYZ TV. 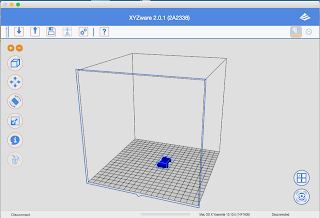 Here is a short video to show its progress. I have also included an image of the SketchUp model it is based on, which was created by one of our very able 8th grade designers. 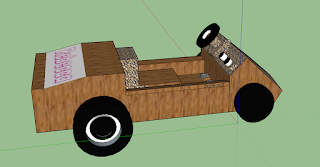 I will upload a shot of the final model as soon as it is done. Which according to the screen should be in about 55 minutes time.

Here are the two first attempts. The improvement is quite noticeable.
The next step is to calibrate it tomorrow and try again. 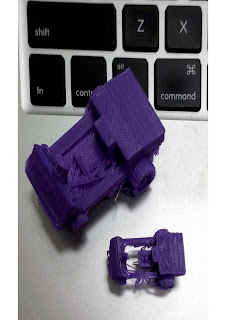 Posted by mrsjgarcia at 14:03 No comments: