Apps for Interaction and Other Ramblings...

I believe to have found myself as what can only be described as the February planning doldrums, which have been exacerbated by teaching online in COVID-19 times. As with anything I believe that the way to get through something and spark positive change is by taking further action. Doing so, usually get those teacher sails a billowing, so to speak. I hope some of what follows here speaks to anyone else who finds themselves in this situation. 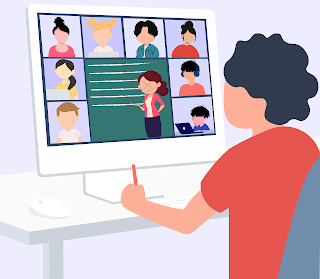 While I know it is not about the apps or about juggling as many as you can, the lack of face to face interaction with our students, despite the use of web cams and Google Workspace provisions can be a bit trying and lead to the development of rather tedious patterns.  Personally, I feel a need to get away from Google applications at times (says the diehard Googler. The irony is not lost on me.) and try something different. If I feel that way, I can only imagine how the kids must feel, as we pile on more docs, slides and  Jamboards. These do provide a stable, familiar approach, which is certainly not to be sniffed at. Lately however, I have been feeling a bit 'Jamboarded' out (she says as she creates yet another new one, this time for Term 3

) Don’t get me wrong, I really like Jamboard, and yes I have used Miro instead, at times, but I think it is time to up my game a tad.
If you are feeling that way as well, it may be worth your while to revisit some of the other web apps out there.
I have used all sorts of web apps since March of last year to try and make lessons more accessible, interactive, and give kids a chance to collaborate in real time outside of Google applications. Some of those are listed below as well as some I keep meaning to explore or revisit.
Whiteboard Chat-I don’t know if any of you have tried this but it looks really cool. Have a look at Richard Byrnes Free Technology for Teacher  article for more details.
I am testing out Parlay in the upcoming weeks for virtual round tables, to see how well it works in online lessons with Meet rolling simultaneously. My computer has a tendency to slow to a halt when I challenge it too much, so it could make for a very interesting experience to say the least.
We mustn't forget that Kialo  for debates is a great app, as well. I use it quite a bit with my IB kids and know it would be good for debate work lower down in the school.
Yesterday, I went on a planning marathon and in doing so I forced myself yesterday to convert a presentation into one using  Pear Deck for Google Slides, again in an attempt to create interactive slides for a lesson in the next two weeks, but know I can use it more effectively than this most recent attempt.
Edupuzzle deserves recognition as a simple to use, web app that lets you create lessons using video and student responses. It is free to teachers as a pro license until the end of July. I have one ready to go for one of my IB groups shortly and am looking forward to measuring its success.
Sutori is a tool for creating interactive lessons that is worth a look at as well. I keep nagging myself about it (It helps that I am on Johnathan from Sutori's mailing list) and mean to revisit it one day very soon.
We have used Flipgrid a few times in 6th grade, at the beginning of the school year and more recently for the SDG project too. Creative project news reports on animal cams will be coming in over the next few weeks and will give us greater insight into the work being done with it. I have found it to be a great too, in the past when we have used it for Pen Pals and other special projects.
On one final note, Nearpod and VoiceThread which we used quite a bit in the early days of the LRC, seem to have come a long way. There is a lot of noise about them in the teacher threads, and are worth revisiting as well.
If any of you are using these and want to share your insight as well, or have other suggestions you want us to be aware of, please do tag  along in the comments.
Have a lovely weekend and get some highly merited rest everyone. At the LRC, we are definitely going to need it for DVA And STEAM Fest, both coming soon to ‘theaterish’ Google sites near you.
More to follow shortly!
Cheers!
Posted by mrsjgarcia at 09:36